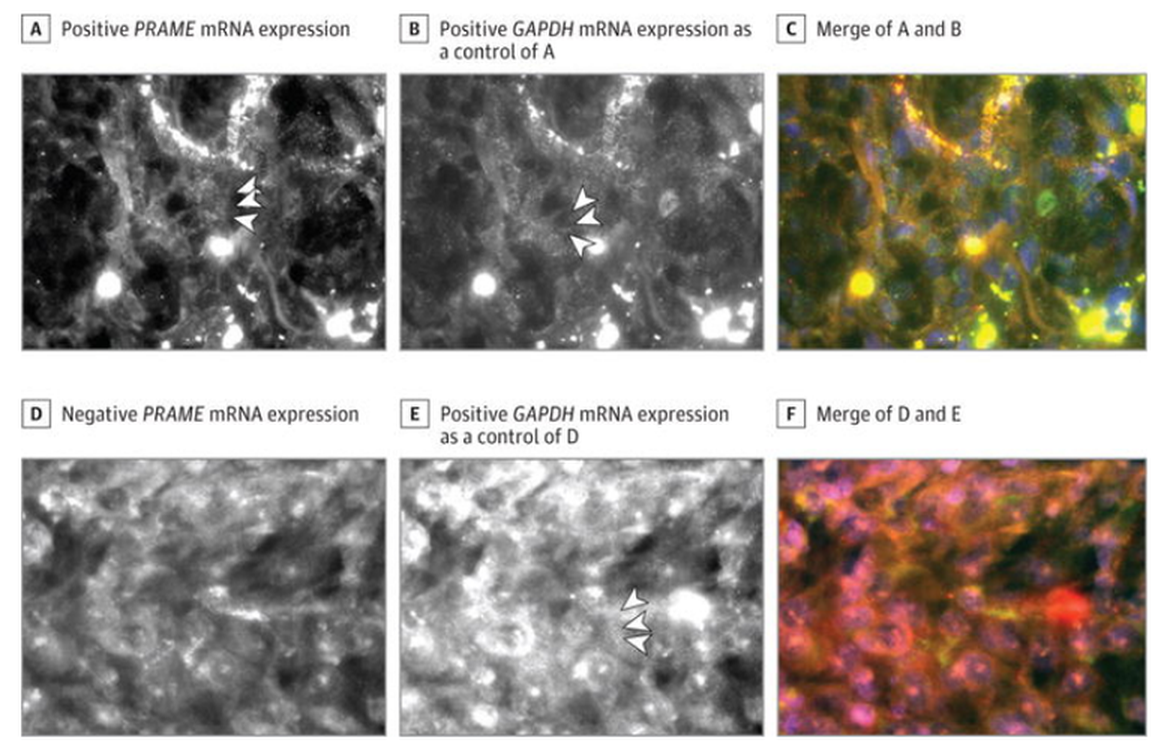 PRAME as a Potential Target for Immunotherapy in Metastatic Uveal Melanoma

The finding that PRAME-specific T cells in this study reacted against PRAME-positive UM cell lines suggests a potential role for PRAME-directed immunotherapy for selected patients with metastatic UM.

Uveal melanoma (UM) is an intraocular primary malignant neoplasm that often gives rise to metastatic disease for which there are no effective therapies. A substantial proportion of UMs express the cancer-testis antigen PRAME (preferentially expressed antigen in melanoma), which can potentially be targeted by adoptive T-cell therapy. Our objective was to determine whether there may be a rationale for PRAME-directed T-cell therapy for metastatic UM.

An experimental study using a retrospective cohort of 64 patients with UM (median follow-up, 62 months) was conducted from January 8, 2015, to November 20, 2016, at the Leiden University Medical Center. Clinical, histopathologic, and genetic parameters were compared between 64 PRAME-positive and PRAME-negative UMs. HLA class I restricted, PRAME-specific T cells were stimulated with UM cell lines to measure their antigen-specific reactivity against these cell lines, which were analyzed for PRAME expression by real-time quantitative polymerase chain reaction. Uveal melanoma metastases from 16 unrelated patients were assessed for PRAME expression by messenger RNA fluorescence in situ hybridization and for HLA class I expression by immunofluorescence staining.

Main Outcomes and Measures were: Interferon γ production for antigen-specific reactivity and detection of PRAME and HLA class I expression in primary and metastatic UM.

PRAME is expressed in many primary and metastatic UMs, and about half of the metastatic UMs coexpress PRAME and HLA class I. The finding that PRAME-specific T cells in this study reacted against PRAME-positive UM cell lines suggests a potential role for PRAME-directed immunotherapy for selected patients with metastatic UM.