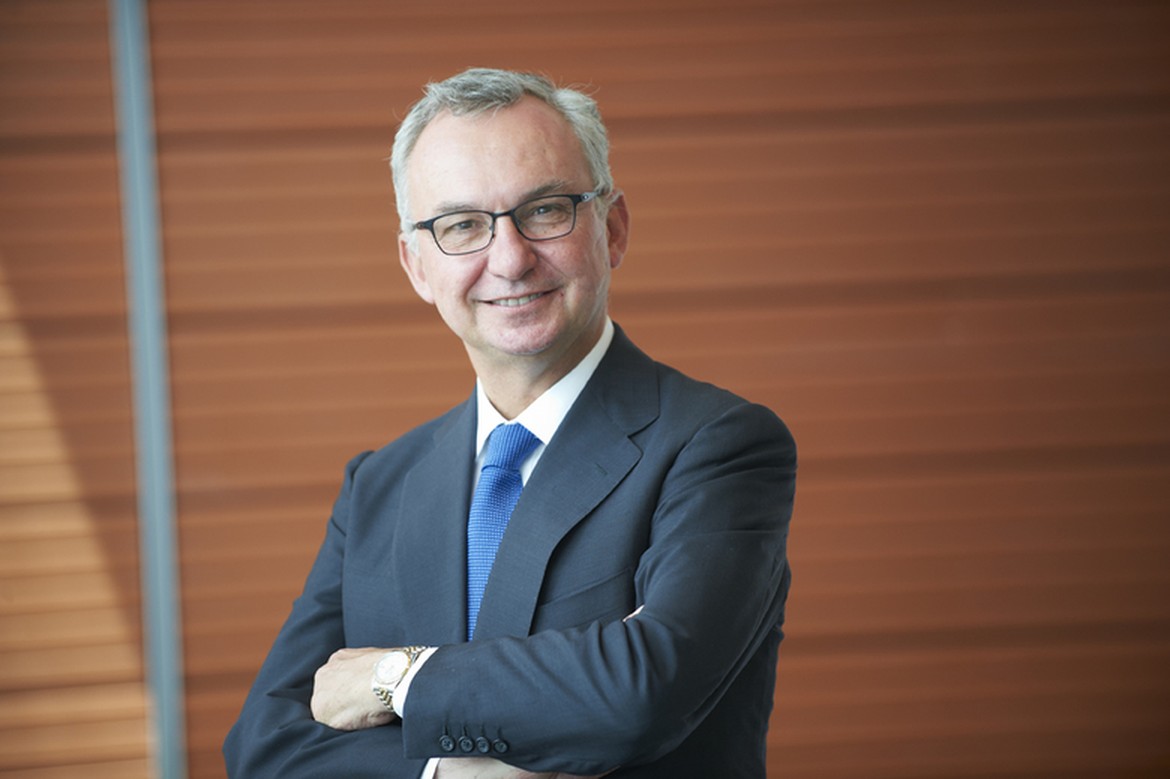 José Baselga received the ESMO Lifetime Achievement Award, celebrating a four-decade career of outstanding relevance in clinical oncology, at the ESMO 2017 conference in Madrid, in his native Spain.

From Gene to Genome: A story of scientific and self-discovery

This past September, José Baselga received the ESMO Lifetime Achievement Award, celebrating a four-decade career of outstanding relevance in clinical oncology, at the ESMO 2017 conference in Madrid, in his native Spain.

Dr. Baselga, who currently serves as Physician-in-Chief at the Memorial Sloan Kettering Cancer Center (MSKCC), in New York City, started by asking the question: “What makes a successful career in oncology?” He then answered “It begins with heart, passion, mission — a mission for life,” to which he added “We are only successful if we have passion.” Dr. Baselga emphasized the need to have a Vision, a clear notion of what one wants to achieve. “The Vision has to be bold and non-apologetic.” Dr. Baselga also emphasized on the need for curiosity and its place as an essential motor for effective change: “Curiosity, which we need to nurture in our clinicians. My fellows never leave the clinic without having learned something new from a patient.” He went on to elaborate that “Curiosity is nothing without knowledge, so we need to keep on top of our game. Without knowledge you cannot have curiosity to match the question you want to address.”

Dr. Baselga was one of the first clinicians to demonstrate, in the early 1990s, the groundbreaking possibility of targeting a specific gene in order to treat cancer. In his talk, Dr. Baselga showed how, following this therapeutic line, his team complemented chemotherapy with the monoclonal antibody Cetuximab, a protein that binds specifically to the epidermal growth factor receptor (EGFR), thereby inhibiting it and halting tumour growth and proliferation. Dr. Baselga’s team followed this with pioneering work on another target, the human epidermal growth factor receptor 2 (HER2), and applied the same principle as with anti-EGFR therapy, thereby targeting excessively expressed HER2 molecules with specific antibodies to successfully shrink breast tumours. That was the birth of Trastuzumab, introduced under the name Herceptin, and approved for medical use in the United States in 1998.

Dr. Baselga also covered his work at MSKCC on the initial Phase-2 studies using Trastuzumab in patients with HER2-positive advanced breast cancer, which later led to the combination of Trastuzumab with chemotherapy in adjuvant therapies, in an attempt to reduce the risk of relapse due to undetected residual disease after removal of all observable pathology. These approaches evolved to the dual HER2 blockade strategy using both Trastuzumab and Pertuzumab, thus blocking the HER2 protein while additionally, and simultaneously, keeping it from binding to other HER proteins (a mechanism that would further potentiate breast cancer development), massively improving the overall survival of breast cancer patients. This led José Baselga to once again note that “Good science brings good therapies, and this is the path that we need to continue to explore.” These studies represent  the adjuvant dual HER2 blockade therapy published in the highly prestigious New England Journal of Medicine in 2017, resulting in a major revolution for patients who, only a few years ago, had a very bleak clinical prognosis. Currently, José Baselga’s molecular targeting studies are focusing on PI3 Kinase (PI3K), another gene commonly mutated in breast cancer. PI3K is heavily involved in regulating cell proliferation and growth, which means that when mutated, PI3K contributes to cell transformation and cancerogenesis.

With these stories of clinical innovation and success, José Baselga drew the evolution of an astounding career in oncology, from 1990 to 2017.

Here, Dr. Baselga paused to propose that, in the next few years, we will witness what he called a “Big-Bang” brought on by the genomics tools currently available to study cancer, such as CRISPR/Cas9 (a genome editing technique that allows for gene modifications to be easily performed in organisms), a set of biological technologies that have allowed us to better define tumour susceptibilities, study epigenetic details of tumour biology and, especially, use circulating tumor DNA (ctDNA, tumour-derived DNA found in the blood stream and that is not associated with cells). Dr. Baselga also emphasized the impact this technology will have on the day-to-day care of patients. These approaches may potentially result in new molecular targets, new epigenetic therapies (those that change the way DNA itself is read and controls cellular biology) and better diagnoses and day-to-day treatment of cancer patients. This will allow, for the first time, to have a cohesive approach on how to clinically move forward, giving clinicians a detailed view of a patient’s specific tumour vulnerabilities, whilst permitting a much more targeted therapeutic angle than ever before.

As a segway, Dr. Baselga talked about the Integrated Mutation Profiling of Actionable Cancer Targets (or MSK-IMPACT) study, recently published in the journal Nature Medicine, which, according to the MSKCC, is “a targeted tumor sequencing test, [designed] to detect gene mutations and other critical genetic aberrations in both rare and common cancers.” This process has been integrated into the day-to-day care of patients. At the time of his talk, Dr. Baselga listed some 20,000 patients as already having been sequenced, data which is kept at the Centre’s databases and can be later used for patient inclusion in clinical trials.

Dr. Baselga moved on to discuss the concept of “basket trials” (in which targeted therapies are effective independent of tumour type — e.g. lung or breast cancer — as long as the molecular target is present and the same) and their importance in contemporary clinical oncology.

At this point, Dr. Baselga mentioned two proof of principle “basket trials” he has been involved in. The first using the B Rapidly Accelerated Fibrosarcoma (or BRAF) enzyme inhibitor Vemurafenib (primarily used for the treatment of late-stage melanoma), where his team analysed BRAF mutations in non-melanoma and non-thyroid cancer, showing there were some tumour types in which all patients responded, including lung cancer, forming the basis for current FDA approval, and highlighting the importance of basket trials for inclusion of rarer types of cancer that would otherwise be overlooked by major clinical trial initiatives. The second story was about an eight year-old girl from Bangladesh, suffering from fibroadenoma and secretory breast carcinoma (a rare subtype of breast carcinoma), who over 6 years received multiple chemotherapies and local therapies, including surgery and radiation therapy, with no response. Her tumour ended up at MSKCC, where José Baselga’s teams were able to sequence it and identify a fusion in a cell surface receptor (the neurotropic tropomyosin receptor kinase, or NTRK), leading to this girl being included in an ongoing clinical trial that resulted in her tumour completely disappearing after 54 days of therapy. This patient is now back in Bangladesh with no sign of disease.

Dr. Baselga closed his talk by addressing the “MSK 1,000 breast cancer genomes” project, currently, he noted — as the off-side comment of a clinical mind accustomed to continuous progress — the 2,000 breast cancer genomes project, an initiative significantly different from The Cancer Genome Atlas (TCGA), as most patients sequenced under the “MSK 1,000 breast cancer genomes” have been treated with multiple lines of chemotherapy, a matching of genomic and clinical data that will provide scientists and clinicians with a unique view of tumour evolution. This, he stressed, allows us to identify genes which are mainly present in the metastatic setting, informing clinicians on how to more effectively treat those patients. Here, Dr. Baselga mentioned once again the importance of ctDNA, incorporated in an MSK initiative called the “Liquid Biopsy Task Force,” currently testing the hypothesis that clinicians may use this technology to replace repeated multiregional biopsies, predict responses to therapy, as well as recurrence, and detect oncogenic mutations at an early stage of cancer development.

At the end of his talk, Dr. Baselga remarked that “We are at an exciting moment where we can merge science and technology with clinical care, and continue to advance the field at a speed we had not seen before.” As he had pointed out earlier, the tales of clinical success he described “[...] are the stories we need to build. These are the stories we need to tell. With one story at a time, the number of patients we will be able to help will increase exponentially.” As José Baselga showed, the history of clinical oncology can be a story of triumph and hope.