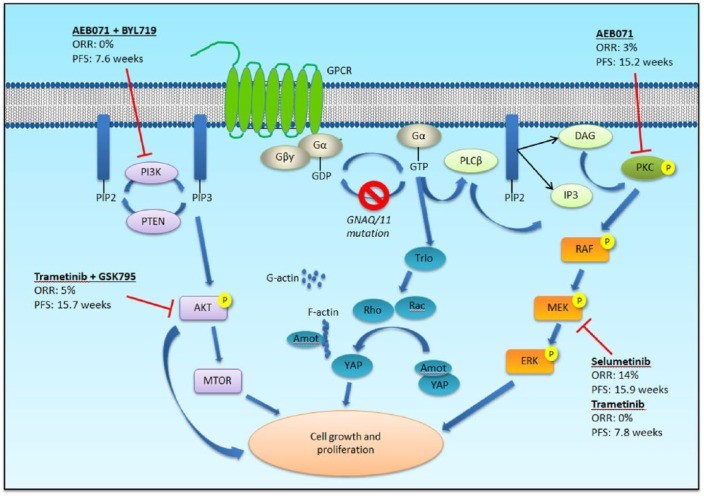 In this paper, the authors discuss the various treatments evaluated in the setting of metastatic uveal melanoma, including systemic chemotherapy, immunotherapy, targeted agents against the MAPK pathway, and liver-directed therapies.

Although rare, uveal melanoma (UM) is the most common primary intraocular cancer in adults. The unique biology and immunology of uveal melanoma requires the development of dedicated management and treatment approaches. Ongoing efforts seek to optimize the efficacy of targeted therapy and immunotherapy both, preventively, after primary tumour treatment, and in the metastatic setting.

Uveal melanoma arises from cells that contain melanin along the uveal tract, including the iris, ciliary body and choroid. Most of the cases originate in the choroid (85%), with remaining cases arising from the ciliary body (5–8%) and the iris (3–5%).

While development of uveal melanoma is largely considered to be a sporadic event, some risk factors have been reported (such as fair skin, light eye color, ocular melanocytosis and dysplastic nevus syndrome).

The vast majority (85-95%) of UM is characterized by activating mutations in genes encoding in the proteins GNAQ or GNA11, which may lead to tumour cell growth and proliferation. Other mutations have been identified, such as alterations in the gene BAP1 (a gene involved in controlling tumour growth), associated with a poor prognosis and an early disease onset. However, given the genetic simplicity of uveal melanoma (in the sense that the majority of mutations are present in the same pathway), epigenetic dysregulation (alteration in the factors that control which genes will “function”, rather than alterations on the genes themselves) plays a critical role in UM. This as led to the development of specific therapies as we will explore further below.

Despite excellent rates of local disease control, nearly 50% of patients develop metastatic disease, with the most common initial site being the liver, with associated poor outcomes. Currently, it is known that the most accurate prognosis profile can be achieved by a combination of the tumour’s anatomical features (how large and how widespread it is) and cytogenetic abnormalities (types of genetic alterations in the tumour). The American Joint Committee on Cancer (AJCC) classifies the tumours based on tumour size, the degree of extraocular extension and ciliary body involvement and can be complemented with the study of liver function (by the evaluation of a liver enzyme –lactate dehydrogenase– that increases its levels in the presence of liver damage, which happens in the presence of liver metastases). Cytogenetic abnormalities, changes in the tumoral chromosomes, such as monosomy of chromosome 3 and amplification of 8q are associated with increased metastatic risk and worse prognosis. Moreover, gene expression profiling (which allows for a more detailed biological information of the tumour in comparison to the evaluation of a single mutation) has emerged as an important prognostic tool that stratifies patients as having low metastatic risk or high metastatic risk with good accuracy. More recently, the preferentially expressed antigen in melanoma (PRAME) – a molecule that is present in the bloodstream of some patients that have UM, has been reported to be an independent prognostic biomarker, being PRAME circulatory levels expression the most significant predictor of metastatic risk in patients who have been classically classified as having “good prognosis” (for example in the case of Class 1 tumours).

Currently, in the US, the first-line for medium sized choroidal melanomas is iodine-125 brachytherapy, since in the 2006 COMS study survival outcomes are similar to enucleation, allowing for globe preservation.  Brachytherapy works by directing radiation to the tumour to destroy it's cells. Late on-set complications may arise up to 5 years after therapy, including radiation induced retinopathy, cataracts, neovascular glaucoma and macular edema. In cases of large tumour size, extensive extraocular growth and a low probability of retaining vision, enucleation should be the first line of therapy. Moreover, the follow-up COMS quality-of-life assessment did find that patients who underwent enucleation experienced less anxiety during subsequent clinic visits than patients who received brachytherapy. Charged-particle radiotherapy is a feasible technique for medium to large tumours or those in a location that may not be amenable to plaque brachytherapy, preferred for tumours surrounding the optic disk and fovea, where plaques cannot be placed directly. The mechanism by which cancer cells are killed is similar to the one in conventional radiotherapy. In comparison to brachytherapy, damage to surrounding normal ocular tissue is reduced maintaining high rates of local tumour control (>95% at 15 years).

Surgical approaches, such as transscleral resection (removing the tumour by cutting the borders from the outside the eye, allowing globe preservation), experience higher local recurrence rates than with brachytherapy or enucleation.

Photocoagulation or transpupillary thermotherapy (TTT) utilizes focused thermal energy to destroy tumour cells, while Photodynamic therapy uses the injection of a compound (such as verteporfin) for priming the destruction of cancerous cells through laser energy. They are used as adjunctive therapy (a complement of other globe preserving therapies) with still unclear results on better outcomes when comparing to brachytherapy.

Tissue factor (TF) is a receptor that is present in the inner walls of blood vessels that initiates the extrinsic coagulation cascade, required for stopping bleeding, when in contact with factor VII (a protein that is activated when TF binds to it). Additional effects include activation of various growth and angiogenic pathways, that have a potential role in tumour angiogenesis (vessel formation), growth and metastasis. ICON-1 is a new drug that is a structural variant of human factor VII. Binding of ICON-1 to cells that overexpress tissue factor eliminates pathologic neovascularization and targets tumour cells for removal by the immune system. An ongoing phase I study is evaluating the safety and activity of intravitreal doses of ICON-1 in patients with primary uveal melanoma prior to enucleation or brachytherapy.

Thus far, no systemic adjuvant therapy (complementary therapy given after primary tumour treatment) has been shown to reduce the risk of metastasis or improve overall survival rate in UM. Growth factor receptors are targets present in the cellular surface that when activated induce cellular replication. In the context of a cancerous cell these can lead to the development of metastases. Drugs that inactivate these pathways (such as Crizotinib and Sunitinib) are being evaluated at the moment. Loss of BAP1 is associated with increased metastatic potential in uveal melanoma. In laboratory studies, histone deacetylase (HDAC) inhibitors have been shown to reverse the effects of BAP1 loss and allow a transition from high-risk to low-risk gene expression profile in uveal melanoma cells. Based on the potential role for HDAC inhibition in the adjuvant setting, valproic acid and vorinostat are being evaluated in ongoing clinical trials.

There are no consensus guidelines regarding the optimal surveillance strategy following primary treatment. Various imaging modalities have been evaluated. Of these, magnetic resonance imaging (MRI) appears to have the greatest sensitivity in detecting small liver lesions that may not be seen on ultrasound, computed tomography (CT) or positron-emission tomography. The number and modality of follow-up imaging scans should be tailored to the risk of metastatic disease occurrence.

There is no FDA-approved standard of care for metastatic uveal melanoma. Various treatments have been evaluated, including systemic chemotherapy, immunotherapy, targeted agents against the MAPK pathway, and liver-directed therapies, but response rates are generally less than 10%.

Uveal melanoma most commonly metastasizes to the liver. An analysis of patients enrolled in the COMS study found that 93% of patients had liver metastases at the time of death. Of those who had only one site of metastasis, the liver was involved in 95% of cases. In certain cases, with an anatomically advantageous location of metastasis, resection of hepatic lesions may offer long-term survival and cure. Liver-directed therapies, such as radiofrequency ablation (medical procedure in which part of the tumour is ablated using the heat generated from an alternating current), stereotactic radiotherapy (a way of targeting radiotherapy very precisely at the tumour), regional chemotherapy such as hepatic intra-arterial infusion and isolated hepatic perfusion (IHP), and embolization techniques are being evaluated for the management of liver metastases.

Chemotherapy regimens adopted from cutaneous melanoma (such as dacarbazine, temozolomide, cisplatin, treosulfan and fotemustine), have been used in uveal melanoma with disappointing results. Response rates range from 0% to 15%, and no agent has been shown to prolong survival.

Advances in immunotherapy, in particular the development of immune checkpoint inhibitors targeting cytotoxic T-lymphocyte-associated antigen 4 (CTLA-4) and programmed cell death-1 (PD-1), have dramatically improved outcomes for patients with advanced cutaneous melanoma (CM). These drugs act by allowing the patient immune system to target and kill cancer cells. Unlike CM, the low mutational burden observed in uveal melanoma may partly account for the limited success of immune checkpoint blockade.  Anti-CTLA-4 therapy (Ipilimumab, Tremelimumab) and anti-PD-1 therapy (Nivolumab, Pembrolizumab) have been evaluated in UM patients both in isolation and combination therapy with unfavourable results*. Despite the disappointing results with immune checkpoint inhibition, a number of novel immune-based therapies have shown promising signs of clinical activity. These new drugs act by altering the tumour immune profile, making it more responsive to immune checkpoint inhibitors. IMCgp100 targets a receptor that is present in approximately 50% of patients with uveal melanoma, and results in a pre-clinical phase show that IMCgp100 redirects a potent immune response toward melanoma cells. This suggests that IMCgp100 treatment can change an UM tumour from being immunologically inactive to active. Eventually, either sequential or combinatorial use of IMCgp100 and checkpoint inhibitors may ultimately improve activity. Studies are underway for confirmation of these promising new data.

Targeted therapy, unlike the mechanism in immune checkpoint inhibitors, acts by inhibiting specific molecules that are important for tumour growth to halt its growth and proliferation. Unfortunately, results have been disappointing so far, with response rates of generally less than 10%. Since uveal melanoma is characterized by mutations in GNAQ or GNA11, which lead to activation of tumour proliferation, therapies that target downstream effectors of these mechanisms (such as MEK, Akt and protein kinase C) are being investigated. Selumetinib and Trametinib (potent and highly selective inhibitors of MEK), have been evaluated in monotherapy and combination therapy, both with unfavourable results. However, new trials with different drug combinations and therapy duration are still being evaluated. Additional therapeutic targets include various growth factor receptors (that also stimulate tumour proliferation) that are overexpressed in uveal melanoma, such as c-Kit and c-Met. Cabozantinib (an inhibitor of c-Met, Axl and VEGF) has shown anti-tumour activity in a xenograft mouse model of metastatic uveal melanoma and Sunitinib (a nonselective c-Kit inhibitor) currently being investigated in the adjuvant setting.

Given the genetic simplicity of uveal melanoma, epigenetic dysregulation plays a critical role in its pathogenesis. Genes encoding epigenetic regulatory enzymes are altered in high-risk disease. The BET family of proteins are epigenetic regulators that regulate DNA replication and reparation. More specifically, a specific member of the BET family (BRD4) may regulate DNA regions that induce the alterations capable of generating cancer cells, including the MYC region. Since MYC amplification plays an important role in uveal melanoma, BET inhibition was hypothesized to have therapeutic activity via downregulation of MYC and MYC-dependent genes. JQ1, a first-generation BET inhibitor that competitively displaces BRD4 from acetylated histones (proteins that keep the DNA super-structure organized), has potent cytotoxic activity in GNAQ/11-mutant cell lines and in a uveal melanoma mouse model, leading to apoptosis (cellular death) in uveal melanoma cells in lab mice. Valproic acid and vorinostat are HDAC inhibitors (molecules that induce cell-cycle arrest, hence lower tumour cell proliferation) associated with lower metastatic risk in preclinical models, are currently being evaluated in the adjuvant and metastatic setting, respectively.

* Possible exceptions are those communicated recently in this paper